LYNX in a nutshell

LYNX (Lithosphere dYnamics Numerical toolboX) is a multiphysics modelling solution developed within the group of Basin Modelling at GFZ. LYNX is based on the flexible, object-oriented numerical framework MOOSE, which provides a high-level interface to state of the art nonlinear solver technology. LYNX is a novel numerical simulator for modelling thermo-poromechanical coupled processes driving the deformation dynamics of the lithosphere. The formulation adopted in LYNX relies on an efficient implementation of a thermodynamically consistent visco-elasto-plastic rheology with anisotropic porous-visco-plastic damage feedback. The main target is to capture the multiphysics coupling responsible for semi-brittle and semi-ductile behaviour of porous rocks as also relevant to strain localization and faulting processes. More information on the governing equations, their derivation and their implementation together with a list of synthetic and real case applications can be found in two publications here and here. 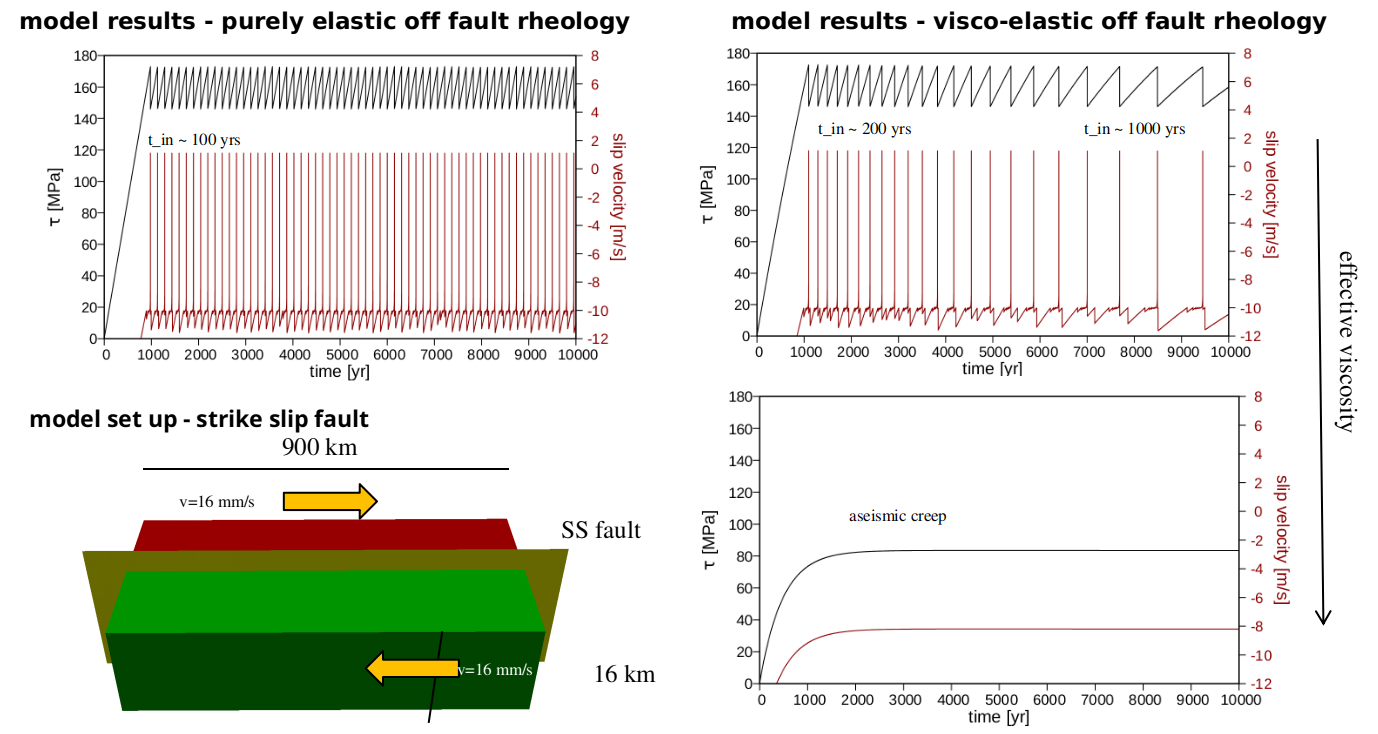 Modelling of the seismic cycle with a realistic elasto-visco-plastic off-fault rheology.

LYNX has been coded following the concept of Object-orientation thus providing a flexible modular structure within easy to be extended modules by the user. It also features geometric agnosticism and hybrid parallelism with proven scalability on HPC architectures. LYNX is based on a realistic physics-based rheological description of lithosphere deformation dynamics based on an explicit incorporation of the lithosphere visco-elasto-plastic rheology including nonlinear feedback effects from the energetics of the system and its extension to account for time-dependent brittle behavior via an overstress (viscoplastic) formulation. It also includes a thermodynamically consistent formulation of semi-brittle semi-ductile deformation including brittle rock behaviour via damage mechanics and ductile deformation via a rate-dependent viscoplastic formulation. Poro-damage feedback is included via a dynamic porosity to simulate the full volumetric mechanical response of the rock. In LYNX we adopt an implicit and efficient numerical implementation of the material consticutive behaviour within a limited amount of internal iterations and we make use of the concept of Automatic Differentation (AD) techniques to compute the full Jacobian contribution of the system matrix.